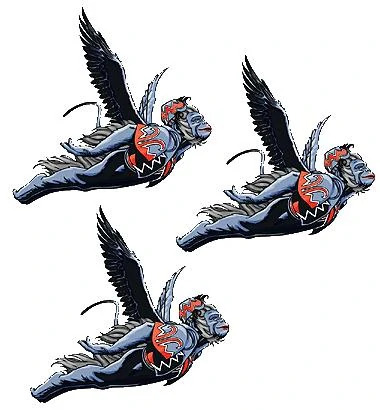 One of the particularly toxic forms of recruiting flying monkeys by narcissists is in family law, where narcissistic persons (typically, mothers) use custody battles to punish their husbands for not offering sufficient narcissistic supply, typically by holding the children hostage. Courts which overwhelmingly award single custody do mothers easily become flying monkeys in the hands of the narcissistic mothers, who commonly falsely accuse the children’s fathers of sexual abuse, violence, addiction and a variety of other forms of delinquency. When these false allegations show themselves for what they are, the false accusers, the narcissistic mothers, are almost never prosecuted for false allegations, because the prosecutors and social workers, often the police as well, have already been manipulated, culturally and within any individual case, into lining up into the roles of flying monkeys for the ‘endangered mothers’, who in fact intoxicate their children against their fathers.

A similar phenomenon occurs with insufficiently experienced psychotherapists, who become recruited by their clients into uncritically supporting their side in a particular conflicted relationship, and harness their social influence and expertise to strengthen the position of one person in a delicate and usually multifaceted conflicted system of relationships. Flying monkeys from the ranks of psychiatrists, psychotherapists, judges and social workers usually become aware that they are monkeys in the game once someone loses their life through suicide or infanticide (often the children are killed by their narcissistic mothers when they cannot prevail in court battles, or by the desperate narcissistic victims, the fathers, who often subsequently take their own lives). Some flying monkeys do not realize their flying monkeyness even after tragedies transpire, and the system often allows them to remain in the same positions and continue the same strategy of repeatedly being made into flying monkeys for narcissists, whilst receiving validation from the system that they are ‘doing their job’, and that the deaths and destruction of lives of children and vulnerable clients are the sole responsibility of the clients, not of the flying monkeys themselves.

The training of psychotherapists must include sufficient content about narcissism to prevent the continuation of the epidemic of flying monkeyness among the therapists, who ought to play the corrective role in a culture where narcissism is increasingly treated as a ‘new normal’. Narcissism is not psychologically normal, especially when it involves the toxic triad of ‘love bombing’ (initial work to attract and bait the victim), devaluation (abuse and neglect of the victims once baited into a relationship), and discarding (rejection and sadistic psychological violence over the victim to extract sadistic forms of narcissistic supply). All of these toxic elements are widespread in family court proceedings and require particularly stringent training, reading and supervision of psychotherapists who might, at some stage in their careers, become involved in such proceedings or events that surround them, directly or indirectly.